Anniversary edition to feature cars and trucks from five decades 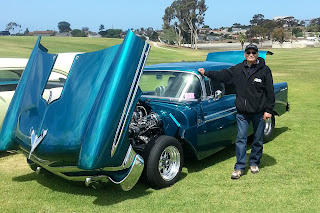 Rev up your engine, get your motor running and get ready to feast your eyes on sparkling electric blue and glossy lemon yellow exteriors, wood grain dashes and bright silver chrome shimmering in the sun. It’s time for the Fredericka Manor classic auto show and barbeque!

In conjunction with Fredericka Manor’s 110th anniversary celebration, the communitywill host the show from 11 a.m. to 1 p.m. on August 23. You are invited to join residents for this special anniversary event. RSVP by August 20 to 619-205-4116. About 15-20 autos including T-buckets, street rods, muscle cars, custom and classic cars and trucks representing five decades will roll into the Fredericka Manor parking lot courtesy of the South Bay Cruisers Car Club. 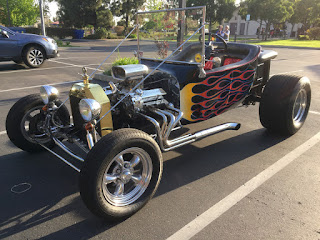 “There is a rich nostalgia that comes with classic cars,” said Fredericka Manor Executive Director Craig Sumner. “Many of our residents are hobbyists or made their living working on and driving many of these classic cars and trucks. The cars symbolize a proud era in American history.”

Among the cars and trucks scheduled to appear at the free event are … a ’37 Dodge coupe, various ’55 Chevys, a ’68 Mustang convertible and a ’55 Ford F-100 pickup, recently featured as a showcase truck at the San Diego Auto Museum. Darrell Rocke, an artist who specializes in intricate wood carvings of cars and trucks, will be a special guest.

Entertainment and a barbeque will highlight the event. Tours of the community will also be available. RSVP by August 20 to 619-205-4116.
Posted by Carmen Mitchell at 11:05 AM 1 comments 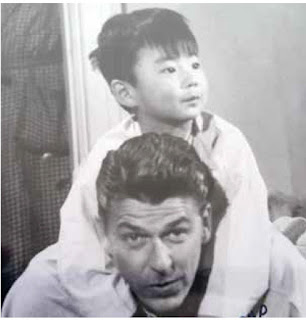 ‘The talk of Hollywood’ appeared with Reagan, Gable, Wayne and Bogart in 1950s Hollywood Films

In the early 1950s, a Hollywood trade publication called Wesley Palms resident Dan Chang, a “four-year-old scene stealer” while another called him “the talk of Hollywood.”

“I guess a lot of people thought I was cute back then,” Dan says with a laugh. “The studio gave me some good publicity, that’s for sure.”
Between the ages of four and 11, Dan appeared in a little over a dozen movies and TV shows. His first role was that of a young Chinese refugee in the 1952 movie Hong Kong, a comedy-adventure-drama about a stolen golden idol, staring Ronald Reagan and Rhonda Fleming.

“There was a casting call for the movie and my father took me to the studio,” Dan said. “I got the part. I was only four years old and just remember following directions. I got to drive a car in the studio parking lot and remember learning to use chop sticks for one scene. I remember learning a lot of odd things on movie sets. In one film I was taught how to peel potatoes.”

He appeared with the likes of Clark Gable, Roy Rogers, Rhonda Fleming, John Wayne, Humphrey Bogart and June Allison, just to name a few of Hollywood’s biggest stars at the time.
“Many of my roles were small so I didn’t really get to know the actors except for Ronald Reagan,” Dan remembers. “Reagan was really nice both on and off the set. He treated me well. We took a lot of publicity shots for Hong Kong. The studio really played up our relationship. I also remember getting to sit on Roy Rogers’ horse Trigger.”

Although his acting career had been successful for almost a decade, just before his teen years his father asked Dan an important question.
“When I was about 11, my dad asked me if I wanted to continue acting or just go to school,” Dan said. “I’m not sure why he asked me but I said I just want to go to school. While making movies there is a lot of sitting around waiting and I would have rather been playing with my friends. I don’t regret quitting. It was fun while it lasted.” 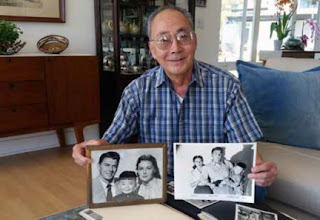 Although he no longer acts, Dan jokes that his life and Ronald Reagan’s life will always be connected. “I was an engineering professor at UC Davis, a California public university, when Ronald Reagan was governor and I was in the Air Force when he was president and commander and chief, so technically he was my boss a few times since working with him on Hong Kong,” Dan said with a big grin.

Wesley Palms recently screened Hong Kong for residents. “Cute was the word everyone used when they saw me,” Dan said. “I got some good-natured ribbing.”

When Dan is not reminiscing about his acting career, he enjoys exercising and using the cycling equipment at the Wesley Palms fitness center. He and his wife enjoy their beautiful new patio home overlooking the Pacific.

Posted by Carmen Mitchell at 10:09 AM 0 comments 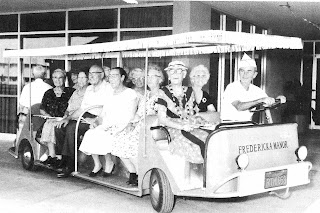 During Ardith Eaton’s residency at Fredericka Manor, her son, Rick, looked forward to their frequent visits. Rick not only enjoyed their mother son time together, but the two often reminisced about how Rick’s grandfather fell in love with Fredericka Manor decades earlier.

“Mom and I used to laugh about how during the 1970s my grandfather, who lived here for 10 years, used to always say … living at Fredericka Manor was like living like a millionaire,” Rick said. “My mom lived happily here for 15 years. That says a lot about this community. I consider it a true landmark in Chula Vista and the South Bay.”

Perhaps one of the biggest compliments to the quality of life at Fredericka can be attributed to several residents who followed in their parents or family member’s footsteps and chose to make Fredericka Manor their retirement destination.

Dr. Paul Erickson, another second-generation resident, fondly remembers visiting his mother in the 1970s and 80s. Most vivid is Paul’s recollection of the dining room etiquette. “It was a time and a place where gentlemen wore coats and ladies wore dresses to dinner,” says Paul with a grin. “I don’t think I could have gotten away with what I have on today,” pointing to his polo shirt and Bermuda shorts. “We’re much more casual now. I like that 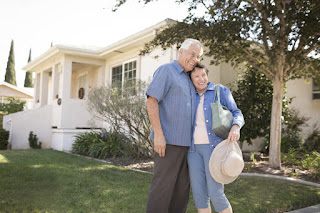 Fredericka changes with the times.”

“My mother loved it here,” Paul continued. “When it comes to Fredericka Manor, mother and I had one thing in common – we love the people. The friendliness of the residents and the willingness of the staff to go out of their way has never changed. It’s the same when mother was here as it is now. It’s why I moved here!”

For Rick, now retirement age himself, following in his family’s footsteps is a possibility. “When I decide to move here, it will be like coming home.”

Posted by Carmen Mitchell at 10:34 AM 0 comments