My First-Hand Account of the Attack on Pearl Harbor, December 7, 1941 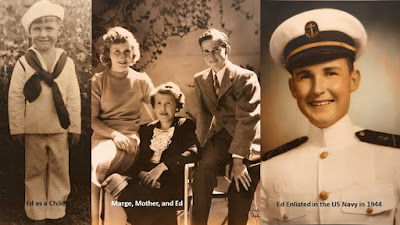 Everyone who was alive at the time remembers where they were on this date. I remember where I was, because we lived on Malama Way in Manoa Valley, overlooking Waikiki Beach on Oahu, Territory of Hawaii. We were just waking up on Sunday morning, preparing to have breakfast and then go to church. Dad was on the USS William Ward Burroughs, two days from Wake Island in the middle of the Pacific Ocean, towing a barge with a huge crane on it. My sister, Marge, was attending the University of Hawaii, and I was in the 10th grade at Roosevelt High School.

At the time, I kept a diary, and this is my entry from that date: "I awoke this morning to the well-known anti-aircraft fire and although it sounded a little more often than usual practice, I thought not much of it, except that why they were firing on Sunday. It was around 8:25 or 8:30 that I was fully awake, and I heard someone downstairs switch on the radio to find the correct time so we would not be late for church. The first thing we heard was the announcer bawl out, ‘Stay off the telephone! Do not use your telephone; keep the lines clear for the Army; this is the real McCoy.’ (Hawaii's king at the time). Mother and Marjorie were getting excited and so was I, but then I said to myself, ‘I don't think this is real, the Army is just seeing what the public would do in case a real raid happened along. This is all a joke.’ I said, ‘Hadn't we had a practice blackout last May? How silly it was for everyone to get heated up over a little practice.’ Boy, would I kid them about it at breakfast when Margie and Mother find out it is just a practice. Everyone started to collect outside in pajamas and other night apparel and were talking excitedly. I hurried and got dressed, not wanting to miss any of the showing."

First, we heard an airplane overhead and then an explosion. The radio was on, and the program was interrupted by an announcer telling us that Pearl Harbor had been attacked by airplanes with the rising sun emblem on the wings! This is no drill!

I climbed out of my bedroom window onto the roof from the second story of our home; I was going to take some pictures. Smoke was rising from the direction of Punaho School, down the hill about a mile away. I saw a P-38 fighter high in the sky zooming along. Mt. Tantalus blocked our view of Pearl Harbor, so I was going to call my friend and hike to the top, where we could see what was going on. Then Mom called me down from the roof and wouldn't let me leave the house. I was to stay and look after Marge and her, she said. However, we could see Waikiki Beach, Diamond Head, and the ocean. Soon, we saw destroyers taking positions at intervals out from the shoreline as if to repel landings and search for submarines. That seemed to be the only activity going on from our vantage point.

Later in the day, I got a call from my Boy Scout troop leader, telling me that I was needed to patrol Waikiki Beach for "blackout." Mom reluctantly let me go with several other Scouts, in our uniforms, hiking down two-and-a-half miles to the patrol area. It was getting dark when we were given our instructions and started in pairs, walking up and down the residential streets. It became pitch dark, with no moonlight.

We were very thorough in our search for any light coming from the homes and apartments. We crossed the main street, Kalakaua Avenue, very carefully. Military vehicles that drove by were very hard to see, because their headlights were taped over, with just a small slit of light showing. It was dangerous to cross. Our method was to stand on the curb, look and listen carefully, then dash across. One time, we had barely gotten to the other side when a vehicle swished by us! Later, we were walking along when a figure jumped out in front of us with a rifle and said, "Halt! Who goes there?" This really scared us, but we managed a squeaky, "It's just us Boy Scouts." Fortunately, he was friendly and allowed us to pass. We were lucky, because there were a lot of trigger happy people that night.

On our hike home, we suddenly heard a shell coming our way from the sky. We dove for cover by the side of the road, just like in the movies. It went over us and hit a field some distance away, but didn't explode. Later, we were told that some of the gunners near Pearl Harbor fired some rounds and that was a dud that didn't explode in the air.

The expected landings did not occur, but people were frightened and some reported anything that looked suspicious. On one occasion, there was a report that someone was on a telephone pole, signaling seaward with a light. This turned out to be a telephone repairman just doing his work.

The next day, one of my sister Marge's naval officer friends appeared at our door in his white uniform, wrinkled and very dirty. He came from his ship in Pearl Harbor. After a bath and a change of clothes, he described the devastation.

When we finally returned to school, we were issued gas masks in a case and shoulder strap. We carried them everywhere we went and had practice drills. When I went surfing at Waikiki, there was barbed wire strung all along the beaches in front of the hotels. The businesses boarded up or taped their windows to protect them and to keep the glass from shattering. Sitting on our surfboards, waiting for the "right" wave, we occasionally saw ship convoys passing just off Diamond Head, with destroyer escorts patrolling for submarines. On one occasion, they made contact and we watched as they launched depth charges that exploded, sending water high into the air. We never heard whether they sank a sub or not.

We heard very little about Dad on the "Willlie" War Burroughs Navy ship. Friends of ours would call now and then to let us know that he was still afloat. It was a very stressful time for my mother. Dad's task prior to the war was to supply materials and equipment to build the docks and piers to make a port at Wake Island. When war broke out, he was on radio silence, making four knots speed while towing a barge. No change of orders came as he steamed on towards the island. Finally, the next day, having heard nothing, he broke radio silence and requested instructions. He expected them to direct him to cut the barge loose, stay clear of Wake, and return to Pearl Harbor. Instead, they realized his predicament and ordered him instead to change course and tow the barge to Johnston Island, another small island south of Wake, and then return to Pearl Harbor.

He delivered the barge with the crane as ordered, without incident. The officer in charge at Johnston asked that the ship remain at anchor in the harbor until the next morning, as they had some civilian personnel for him to take back to Pearl. During the night, while at anchor in the small uncharted harbor, a Japanese submarine surfaced on the opposite side of the island and proceeded to bombard the installations. Shells that missed the island landed around the ship! Dad got the ship underway and tried to weigh anchor, only to have the anchor fall on one of the coral heads. They broke the anchor chain and cleared the harbor. Fortunately, they missed hitting other uncharted coral heads as they got away in the dark and the submarine never knew the ship was there. He then returned to Pearl Harbor.

In February 1942, Mother, my sister Marge, and I were evacuated to the States, along with other families. We boarded a Navy transport ship in a convoy. As we passed Diamond Head, I was thankful that the destroyers around us did not need to drop any depth charges!

LifeBio is an engagement program that captures cherished memories and lasting legacies through storytelling. Since launching in 2000, LifeBio has helped 20,000 people tell their life stories through autobiographical tools and services for all levels of care. LifeBio uses technologies as mediums to help individual document their stories in an easy and unique way such as tablets, web cams, and audio and video equipment. LifeBio has been a partner with Front Porch since 2009. For more details, check out LifeBio’s Impact Story on the Front Porch Center for Innovation and Wellbeing (FPCIW) website.
Posted by Carmen Mitchell at 10:58 AM 0 comments