Introducing Stitch: A New Program that Connects Seniors with Shared Interests! Program to be Piloted by the Front Porch Center for Innovation and Wellbeing 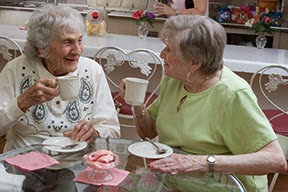 Residents living at Front Porch retirement communities often tell me that once they move in, it’s pretty easy to make friends. With a variety of clubs, groups and social activities to choose from, it’s just a matter of time before a newcomer finds someone who shares his or her interests or has a similar background that makes a lasting personal connection possible.

Now there’s a new program that offers new opportunities to find friends and connect with other like-minded individuals!  It’s called Stitch. The creators of Stitch are partnering with our Front Porch Center for Innovation and Wellbeing to help pilot the program. Stitch was developed by a San Francisco-based company called Tapestry. The program helps link people 50 and over, based on mutual interests. You may say that Stitch is just like any other “dating” web site but it’s not. Stitch focuses on companionship rather than love and marriage. Stitch has done research and found that not everyone is looking for love, but everyone is looking for companions – a golf buddy, a dinner date, a hiking companion, a travel partner, etc. But because of divorce or the death of a spouse or of friends, regular companionship may be missing which can lead to social isolation.

Many experts have documented the devastating effects of social isolation among older adults including serious health consequences. Stitch’s founders recognized this and were determined to help.

Earlier this month, Stitch announced its expansion into Southern California and invited the Front Porch Center to test its innovative program among residents living at several Front Porch communities. In a few months, resident volunteers will sign up for Stitch and give feedback to the Center on their experiences. These Stitch users will connect with fellow residents living at other Front Porch communities as well as other seniors living nearby. 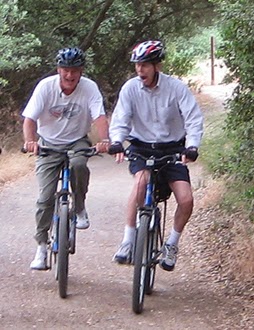 Stitch’s founders attribute its initial success to an extra level of security—an age minimum requirement and identity verification. Stitch requires a thorough identity check before full profiles can be viewed and communication is allowed. This identity check ensures that all members are over 50 years of age, making Stitch the only restricted peer-to-peer online social connection service for Baby Boomers and seniors.

The Front Porch Center looks for innovative ways to use technology to empower individuals to live well, especially in their later years and to harness technology solutions that support and enhance wellbeing and help each of us to thrive in mind, body and spirit. Stitch’s efforts to help older adults find meaningful relationships and improve wellbeing is an important part of that equation.

Stay tuned to this blog for more about Stitch in the coming months. For more information about Stitch, visit www.stitch.net.

Creating a Story of Hope in the Face of Dementia

Just note the momentary panic that we feel when a word or a name is on the “tip of the tongue,” when we can’t find our keys or our glasses, when we realize we’ve forgotten to pay a bill or make an important phone call. We joke about these “senior moments” and fervently hope that it’s just a temporary lapse, not the beginning of something more serious. So what is it that we are so afraid of?

Dementia is an umbrella term describing a variety of diseases and conditions that develop when nerve cells in the brain die or no longer function normally. Alzheimer’s disease accounts for 60 to 80 percent of dementia cases. Other types of dementia are vascular dementia, dementia with Lewy bodies, mixed dementia, and Parkinson’s disease.

Read article in full at the Lutheran Services of America Newsletter
Posted by Carmen Mitchell at 11:51 AM 0 comments

How to Live and Die Well: Buddhist Teachings from my Jewish Grammy

At 97, my Jewish grandmother was becoming a Buddhist (although, I’m not sure she would have put it that way).

This is what I know:

My grandmother, Florence Pinchak Misurell, was the daughter of Russian Jews who emigrated to the U.S. in the early 1900s. Her mother, Molly Pinchak, worked as a seamstress in the New York garment factories and eventually opened her own dry goods store. She became a socialist, a suffragette and an atheist. And although she remained very involved in the Jewish community until the end of her life, sewing clothes to send to the Kibbutzim in Israel, she was a devout “non-believer.”

The story goes that when my mother and father were first dating, Molly sat my father (an Irish Catholic who was having his own crisis of faith) down and grilled him on religion. “What do you think happens after you die?”

Posted by Carmen Mitchell at 11:55 AM 0 comments

I Was There: Remembering Martin Luther King, Jr.

Have you ever experienced a moment when you were forced to put your beliefs into action? When you knew you couldn't sit idly by and wait for someone else to take a stand?

For Don McEvoy, a friend and colleague of Dr. Martin Luther King, Jr. that moment came in his early 20s when he was a young pastor in the segregated south during the 1950s.

In this video Don McEvoy shared with us the moment that made him realize that he wanted to dedicate his life to the fight for civil rights.

Don McEvoy is a resident at Wesley Palms Retirement Community. We’ll be posting more of his interview in the weeks to come. Stay tuned!
Posted by Carmen Mitchell at 3:40 PM 0 comments

What inspires you? A Friendship Forged Across Generations

Are age differences a barrier to friendship? In our communities we find that not only are they rarely a barrier, but that friendships forged across generations can be mutually beneficial. Mika Miller, the director of resident services at Carlsbad By The Sea, spoke with two friends, caregiver Daniel Lack and resident Dr. Carlin Matson about how their friendship evolved despite an age gap of almost 80 years.

Daniel Lack: When I began working at Carlsbad By The Sea I came for the experience and to use that experience as a stepping stone in my nursing career. Shortly after starting I was asked to get to know and provide companion care for Dr. Matson. I wasn’t sure what to expect but with an open heart and mind I met one of my best friends.

An age gap of 79 and ½ years had no borders on our relationship. A couple times a week “The Man” himself and I took walks down the boardwalk to State Beach so that we could “mind surf” in the ocean together. We would continue our walks back to Carlsbad By The Sea to play billiards and eat lunch together. This was fun, but it was the in between activity time that Doc and I bonded. The conversations, the goofing around and the stories that we s 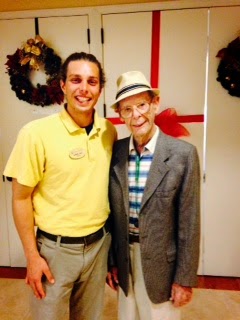 hared gave me a grandfather figure who I have a ton of love for.

I will not forget Doc and his wife Ruthie for they have printed a mark on my heart. I am leaving this community and headed back to Long Beach but when I am in the area visiting my friends, the Matson’s are on that list to visit!


Dr. Carlin Matson: Most of my career life was spent in Inglewood, California where I was a dentist to all ages, bought a home and raised children with my beautiful wife Ruthie. I had many friendships along the way.

I retired from dentistry in my 70s and find myself some 32 years later, 102 years old, missing male companionship, someone to share my energy and active time with. My daughter and wife recognized that need so they arranged for a weekly companion. That is where I met Daniel, a very polite and attentive young man.

Gradually a friendship developed over the time spent during those weekly meetings. We would walk and talk, share our stories and play billiards. Sometimes we would share a meal together. I could tell he was a good kid, polite, what we would call a gentleman. We built our friendship over the months.

As all young people do and as I did before him, Daniel found his calling and decided to pursue a nursing career. That being said, he has moved up to the Los Angeles area to begin his schooling. Some would say we had a nice relationship but what we had was an equal relationship, two guys just hanging out and he won’t be forgotten! I look forward to his future visits when he comes not as my companion but as our friend.
Posted by Carmen Mitchell at 10:31 AM 0 comments