When There is a Will Involved, Always Find a Way ... to Get it Done 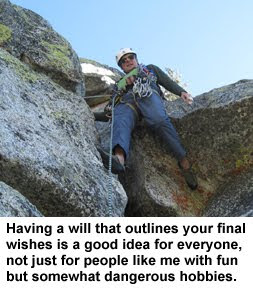 At about 11,000 feet above sea level, the ledge was cold despite that fact that it was the middle of summer. Overtaken by 80 mile per hour winds, my climbing partner and I had just been forced off a summit attempt on Lone Pine Peak, near Mt. Whitney. We descended until it was too dark to continue. Anchored by our rope to the wall, we felt relatively safe until the rock fall started.

At that time I had one son and no will. I had a long, mostly sleepless night to contemplate the fact that, while Melissa and I had talked about a will even before Kellen was born, he was four and a half years old and we had yet to put together the most critical part of our estate plan. How ironic it was, that in my role as an executive for the Pacific Homes and FACT foundations, I had given a presentation on the importance of having a will to the residents of Wesley Palms Retirement Community in San Diego a few months before my trip.

Oftentimes estate planning is derailed by thorny decisions. For Melissa and I, it was the issue of who would raise Kellen if we were both gone. Family dynamics in such matters can create uncomfortable tension in spousal and other relationships and sometimes it seems easier to say “let’s talk about it later.” No one wants to ruin a nice dinner with an argument about guardianship.

Last month, a resident at another Front Porch retirement community, Casa de Manana, shared a similar story with me. She had recently revised her will after agonizing for many months over choosing an executor. Her estate planning had been stalled out of her fear that choosing one child over another would cause conflict with and between her children. She was pleased to relate that, after discussing the matter them and opening up long-closed lines of communication about finances, end-of –life choices, and personal values, her relationships with her children had actually grown deeper. She found that the decision she had feared for so long was a blessing in disguise.

Melissa and I had a similar experience in updating our will when having frank (and long overdue) conversations with our respective families. Here are my suggestions in approaching your estate planning:

• Assessing the overall goals of your estate plan is the key to getting started.
• Don’t concern yourself with asset distribution initially. First determine what you want to accomplish for friends, family and charity after you are gone, then think about finances in the context of those goals.
• Oftentimes, though not always, consulting family members about a difficult estate planning decision can reduce your anxiety.
• Once you have established your over-arching goals, your professional advisors can help you implement your plan.

Melissa and I have three boys now and a will. Kellen climbs with me regularly. And I always check the weather forecast before we go.

—Keith Church
Posted by mlmartinez at 8:14 AM 0 comments